Day 4 Monday June 30
Monday and the day for St Denis. My impression was that the forecourt and the shopping areas nearby were much cleaned up and really quite pleasant, whereas last trip, 10 years ago, I found the area dirty and a bit threatening.
I really had no recollection of the necropolis section in the Basilica at all, which was a bit weird. However, this time we explored and admired the glass, mosaic floors and vaulting as well as the tombs themselves and the history attached. I do recommend the audioguide though there are also good explanatory signs. Some of the glass is still being restored and in places has been replaced with temporary material with a blue cast to it. You get the effect. The north transept rose window was glorious in purples and blues.


I love how the marble is worked, often in exquisite detail for clothes, that some chose to be depicted naked before God while others are depicted perhaps looking holier than was the reality. I enjoy the small details of figures at the feet or beneath the main figure that are delightful works in themselves, the effort expended on carving the capitals of the columns and the beautiful stone vaulting. Of course we have to remember that much is owed to Viollet le Duc in restoring the place, which was basically destroyed in the Revolution, though thank heavens they didn’t go for his total plan involving many towers and pointy roofs.
That evening we revisited Rue des Abbesses and had a glass of wine at Le Sancerre for old time’s sake, doing some people watching in the process. There seem to be many more tourists moving around in large groups and lots of what appeared to be school groups in their early teens. I remember lots of locals last trip, but they were not so apparent this time. Perhaps they have moved on. Paula told us that a number of the old sex shops on Boulevarde de Clichy were being converted to trendy bars and restaurants.
Nearby, Nom de la Rose shop, cafes, lovely hot chocolate made the proper way and bright umbrellas from our window.

Then home to open a bottle of the Champagne from Epernay to accompany our fresh salmon from the markets.
Day 5 Tuesday July 1
A revisit to the Rodin Museum was scheduled. A queue of about 20 minutes but mercifully not raining. Parts of the grounds at the rear are under reconstruction so the pretty pond and stretches of grass were not apparent. The front garden was lovely and beautifully kept as always. There was a display by young artists of big works in concrete but I didn’t find them enticing, especially given that they were competing with the Rodins. On our previous visit the parquet floors in the house were in a very precarious state, so much so that I feared going through them. That, at least, has been repaired.

How lovely to see the familiar art again, though I confess to being bemused by the same statue again and again in different sizes, different materials and in different places. When is it an “original” if there are multiples? We saw The Age of Bronze in the Rodin, in a green patina in Lyon, in a bust at the Mapplethorpe exhibit at the Rodin Museum and again somewhere else. The Kiss exists as a small bronze, a large plaster, a marble. Balzac is at the Rodin and also at the gallery in Melbourne, Australia. I guess there is nothing to prevent an artist from re-casting his works but it somehow then becomes less valuable in my eyes. 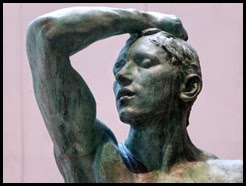 The Age of Bronze
We not only saw the Mapplethorpe/Rodin exhibit at the Rodin but also later attended the Mapplethorpe at the Grand Palais. However, for now, the comparison of the two artists was enlightening and their use of pose and light and shade drew attention to their works in ways I wouldn’t have thought. Things like movement, drapery, human forms in stillness and action, and a surprising light on the erotic side of Rodin’s works; most interesting.
Into the city to find the Grand Palais is closed on Tuesdays. No matter, we wandered over Pont Alexandre III taking lots of photos of the bridge and statuary and also of the excessive decoration on the two palaces. Quite fun!

Tonight the Bach Motets at Notre Dame, booked in advance, though one could have bought tickets on the night. Perhaps the only difficulty with this evening was the timing, with the concert at 8pm and doors opening at 7.30pm. The queue for good seats had obviously started earlier than that as we were some way back in the line. We looked for somewhere to eat early and could really have planned this a bit better. The little bistro on Isle St Louis was OK, but not memorable.
For some inexplicable reason we both thought we were attending an organ concert, so the motets were an unexpected delight with about 40 singers across all ages. The organ was there, but as background to the small orchestra. We sat facing towards the stage, placed in front of the rear doors, and were just submerged by the glorious sounds in the beautiful cathedral as the light faded through the glass. They finished with Immortal Bach with just the voices intertwining as the huge doors were opened. A stunning night.

Day 6 Wednesday July 2
A fine and sunny day, even hot, and we have planned for the Grand and Petit Palaces, places we have never been before. I think they may have been under renovation during previous visits. What a treat.
First the Petit Palais for the “Paris in 1900” exhibition. No queue when we arrived, though a small one when we left about 1pm. One has to query why they waited till 2014 to hold a retrospective on Paris in 1900 but it was very well done, beginning with the Grand Exhibition for which the palaces were built and moving through a series of themes, such as Paris by Night (with theatre and some naughty bits), The Parisienne (costume of the time, simply exquisite work), movies in Paris and so on. Well curated, wide ranging and interesting.

The general collection at the Petit Palais is free and we saw a few small parts of it, and it would be worth a return visit. The building itself is stunning, with an internal garden surrounded by a colonnade, lovely mosaics and a pretty cafeteria where we managed to snaffle an outside table for a light lunch and a glass of wine; then a dessert; then a coffee because it was just so nice to relax there. Somewhere for free toilets too.
Across the road to the Grand Palais. We only saw one section where the Mapplethorpe exhibit was housed but there were multiple exhibitions on in the building. Mapplethorpe is not one for spontaneous photos. Each one is meticulously posed and lit and the focus is exactly right. I had to pause for some time at one photo to determine if it was of a man’s face or a statue, so clever was the lighting and the point of view (it was a statue). While he is well known for his erotic male nudes, his female photos are also amazing, including one of a pregnant belly, and the flower shots are like sculptures in light. His mastery of the balance between light and dark, black and white, form and line was extraordinary. An absolute perfectionist. 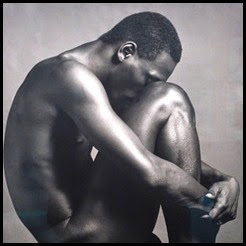 There was one room with more erotic/pornographic shots but I didn’t find myself shocked. There may be some aspects of his work that were not shown but this little old grandma just found the photography exceptional. I was very glad we went.
We popped into Galleries Lafayette for the sales and obligatory photo of the dome but nothing took our fancy so home we went. 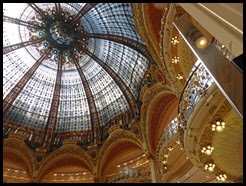