It was a very long drive from Douarenenez to Rochefort, broken by a stop at Pont-Aven where our regular rain cloud caused a deluge. We waited it out in a cunning bar which was connected to the patisserie shop next door; coffee or chocolate at the bar, choose your pastry at the patisserie and it is brought on a plate.

In the town it was the bikies day out, maybe 60 of them. They circled through the streets with a roar, twice, shepherded by guys in hi-vis vests and with sirens. Tough fellows! So it was amusing to see them using umbrellas to protect themselves as they exited the coffee shops from the rain they had just ridden through so triumphantly.

A few photos of the mill and the stream made famous by the likes of Gauguin, a giggle at the stone WC built out over the water (one hopes that is no longer the disposal method), purchase of some chocolate slab and a postcard for the grandchild, and off we went again.

The countryside is under cultivation; waves of growing green wheat and lines of just planted corn, contented looking cows, several wind turbines which I always think are graceful and for the first time, two fields of poppies, neither of which I was able to photograph. The roadside is daisies and buttercups, Queen Anne’s Lace and pinky grasses with the occasional pop of red from poppies.Houses are changing from small Cornish looking, white or cream places to many of stone, with stone barns and curved tile roofs in a more Mediterranean style. Very peaceful country.

Into Rochefort and our GPS guided us right to the B&B, another lovely find http://www.palmiersurcour.com/ With a little time to kill, and having evaded our rain cloud, we went to the square Place Colbert where competing cafes offered drinks in the sun or shade. After more than 400km that beer tasted very good. Dinner at La Scala, which contrary to Tripadvisor listings is Italian, not French, but very friendly and welcoming. Great appetisers, reasonable pasta/pizza. They also had meat and fish options.

Morning. A lovely sleep on very smooth bed linen and a comfy bed, a nice hot shower and an excellent continental breakfast including home made yoghurt and jams, local honey and good coffee. Off to see the sights which included the Corderie Royale, the place where ropes were made for ships. Fascinating stuff including a small demonstration in French and an audioguide of the process in English. The machine they actually used back then made hawsers from hemp twine in a building 374 metres long and was basically the centre of the shipbuilding industry in Rochefort in the 17th and 18th centuries.It burned in 1944 and was restored in the 1960s by volunteer labour. It is a wonderful exhibition and gallery space and a beautiful public park.

Part of the river frontage of the Corderie Royale. It extends past the building on the right

In alliance with that, the ship the Hermione is being recreated in the nearby naval docks, built originally by King Louis and Napoleon III. Hermione took Lafayette to America but was later wrecked. Using only pictures and plans of similar ships, Hermione is being recreated by a foundation. Planning began in 1977 and in 2015 it is hoped the ship will sail to America. As far as is practicable and safe, old methods and crafts are being used in the building. Fantastic!

There followed a stroll through the Saturday markets. I love the beef heart tomatoes, the huge artichokes, the shiny strawberries that perfume the street and the fat white asparagus. Plus the buzz of the markets themselves.

Lunch in the Place Colbert. Nicoise salad and then excellent glaces, citron vert et framboise. Yum! Then a trip to a nearby area to see  a Transporter Bridge. This acted like a ferry but carried cars across on a sort of trolley on suspended wires so it did not obstruct the shipping lanes. It was superseded by a raising bridge and then eventually by a high arch.

Then yet another Vauban fort. This guy was responsible for building defensive forts all over France and we have met him often before, most notably in Besancon, Briancon and the Gironde. The fort at Fouras is small but aligns with several others to protect the coast at Charentes. Worth a visit if you are in the area. Our storm cloud came back and rained on us, so home to the B&B.

On the way back, a glimpse of the fishing houses which drop a net and then lift it with a catch. Some are at the end of piers but this was in the estuary/bay. 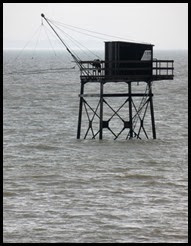 A light dinner out in Place Colbert again. Not haute cusine and not very good service from a busy waiter, but pleasant enough. This is a town that bears visiting and along with its nearby seaside companions would be an excellent stop for families. Lots to see and do in the environs.

Posted by Lynn and Nick Booth at 12:26 No comments:

This impossible to spell place was a stop for 4 nights. Our approach was via the Valley of the Saints, mentioned by a Tripadvisor member and well worth the detour, though I might mention it is more hilltop than valley. Many artists in stone have carved out huge figures of various saints, most of them local and most of them unknown to me, and placed them around a beautiful meadow covered hilltop. I took much joy in the meadow, covered in buttercups and daisies, as I have been taking in the road edges with swathes of daisies, pink flowered grasses, buttercups and dandelions and even the occasional poppy. I find the countryside ordered and calm, with fields of wheat, controlled trees and only occasional forests.

So this is what we experienced with some of the saints. The actual workshop and shop were closed so we couldn’t purchase a poster of the saints. Some will have to remain mysterious. Just enjoy them for what they are and remember they are about twice life size, and that any one of them would happily grace a church.

We passed the town of Cast and saw a lovely old church and granite cross, so decided to stop. The inside was Romanesque, the confessional dated 1790. I guess sins were confessed right back then too.

Into Douarenenez which was a town which made its wealth from canning sardines brought in by the local fishermen. Sardines have declined in number now and the canning is sparse, but once they lined up to deliver their catches. The streets are narrow and crooked, often one-way, and had me leaning sideways in the car as if to do that would avoid making contact with walls or barriers. Luckily we came through unscathed.

The hotel was a tall, pretty, old building near the Sablons Blancs, apparently used by artists in the past, including Picasso. One of our more expensive stays but a beautiful room and a light filled breakfast/dining room. It also has an indoor pool and some spa treatments, for which the area is quite famous these days, and is almost on the coastal walk. http://www.hoteltymad.com/

Our objective here was rest, nice dining and exploring the wild west coastline of Brittany. We drove through these small white stone houses like Cornwall or Ireland and found we were in an area called Ouest Cournouille (pronounced west Cornwall). First, Baie des Trepasses or Bay of the Dead, complete with German fortifications again and the incongruous hotels which seem positioned to catch the fiercest of Atlantic gales. But we had almost nice weather and I could see the beach and sundeck might be well attended some days.

Then to Point du Raz, the most westerly point of France. Surprisingly, it was well organised with a tourist centre, shops and cafes and a delightful walk (or even a navette) out to the point. The rock formations were stunning and the currents past the point quite dramatic on even a calm and sunny day. Many lighthouses and beacons attribute to the dangers of the area. A visit out to Point de Penhir showed a monument to the French. Again a very precipitous coast.

We returned via a supposed megalithic site. One was carefully cemented into place and lacked a certain authenticity. The dolmen nearby may or may not have been authentic:it certainly was impressive.

We visited Point d’Espargnes with old forts but they were very overgrown and a bit of a disappointment.
The next day we visited the highest point around, Menez Hom,  and enjoyed the view and the insouciant way the parasailers took to the air with just a step or two into the wind.

Later we passed an alignment at Lagatjar, with the stones set upright again in 1928 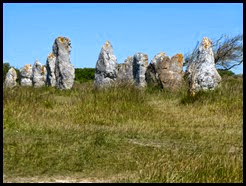 We much  enjoyed our visit to Locronan, shrine of St Ronan who is unknown in Australia. The village is a Plus Belle Village, very popular with tourists, but a charming church with an older one attached and streetscapes of old houses made it a lovely stop. It was a bit of a surprise to find an Australian bottlebrush and a Geraldton Wax in full flower. They belong on the sandy west coast of Australia.

We had at some stage intended to stay at Huelgoat, so we visited to see what we had missed (or not). It was a most charming town on a small lake. Several cafes and restaurants were on offer, some lovely walks among boulders and along the stream and a market in the town when we arrived. Really very pleasant and perhaps a good base. A week may have been too long for us. 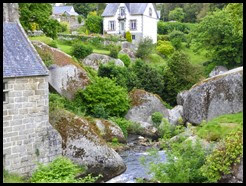 Eating around Douarenenez was not fantastic. We had several OK meals but I have to say that the dining room at the Best Western Thalasso was very good; close to fine dining with a maitre d’ who knew how to run a dining room. When we had a small complaint about a course, he not only insisted on rectification but also comped us two glasses of dessert wine. And the price was very reasonable; we paid more for lesser ambience and food the next night.
Tomorrow: Rochefort
Posted by Lynn and Nick Booth at 12:21 No comments: