We really weren't expecting the specialist to say that Nick needed oxygen to fly long haul. Nor did we expect, when the doc signed all the permission papers for the four different airlines we will use, that things were not going to be simple.

First, Qantas can't fit oxygen to an A380. Maybe we would care to fly out of Melbourne on a different plane, oh, and purchase a seat for the oxygen cylinder. Well, no, we wouldn't care to actually...
So began the exploration of the various methods of getting oxygen on a plane and the various costs of doing so.

SWISS wanted 450CHF per leg, or $545aud, and there are 2 main legs and 2 minor ones. Air Canada wanted $900 to get us home from Vancouver. We couldn't seem to get bottled oxygen on Qantas without paying for a new seat. So we researched POCs, or Portable Oxygen Concentrators.
Last time I saw one of these they were the size of an air-conditioner and had to be wheeled about on a trolley. Now they come as quite small cubes. Do-able we thought and we could hire one.

More calls and enquiries. Qantas allows POCs to be plugged into special medical power outlets but the other airlines don't and we figured, in the end, that we would do better with a POC for all flights, but with additional batteries, enough for 150% of the longest flight, even though Nick doesn't need it on the ground and the 16 hour plane flight from Vancouver would run out of fuel before it flew 24 hours. But rules is rules...

Our supplier in Sydney could provide 2 battery packs. We needed 6. Ouch! Then bingo! A supplier in Adelaide had a concentrator and the required 6 packs. Another flurry of emails, more things signed by the doc, separate permissions from each airline, clearance from Qantas dangerous goods for the battery packs.

Then the courier didn't deliver. More phone calls. Finally, on late Tuesday afternoon we had the rather large and daunting carton of equipment. Wednesday Nick tried all the bits and pieces and all worked well. The Travel Insurance people answered questions to our satisfaction. So, with one working day to go (Easter looms) we are all systems go for the flights.

An additional 10kg of awkward machinery will go in backpacks and we will go on a holiday starting Easter Monday.

UPDATE AFTER THE TRIP: All through the trip we carried 2x5kg backpacks with the equipment. It was clearly labelled as an oxygen concentrator and batteries which may have helped. We had to request the right seat on Qantas at check-in despite all the previous discussion. The technician checked we were aware of the power point adaptor. The staff were totally unaware we were approved to use the equipment.
On other flights we had very few queries at check-in and only one at one security point. No one ever asked why we had more than the approved carry-on allowance. We were never required to demonstrate the batteries or their charge. And to prove a point, Nick didn't use the equipment on the longest flight and was fine. It was a bit of a blessing when he had a bad cough on the cruise and in Brussels just to relieve breathlessness but otherwise, I guess it was an insurance policy just in case.
Posted by Lynn and Nick Booth at 01:43 No comments:

To Portland and Family

July 15, 2014
I have changed the publication date of this page so it appears first rather than last. That way it is not so public for people other than family.

So the travel day from hell arrived, from Paris, to Zurich, to Los Angeles to Portland. At CDG we missed asking about the lounge until we were through security, then, with all Euros spent, we discovered that the lounge there was for gold card holders, not business travellers. So no breakfast. We survived!

A smaller plane first to Zurich. I was surprised to see what appeared to be a nuclear power station on approach. I gather there are 4 such stations. Contributing to the cloud cover here though.


We travelled Swiss and the seats were separate and on the long haul we could lie flat and sleep.The  seats are in a 1 + 2 + 1 formation and each has a console beside it. The seat beside slides under the console in front to make the flat bed. So Nick and I were in side seats one behind the other. As Nick listens to music and sleeps and I tend to watch videos and not get to sleep, this suits us fine. 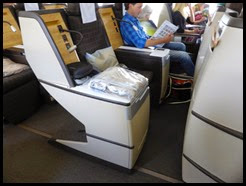 We had a good lunch with a sea bass sashimi, beef fillet, berries and some nice wine.I was a little surprised that we still flew across much of the ice cap so I could see icebergs in the ocean when I woke and dared to lift the blind, as it was daylight all the trip. 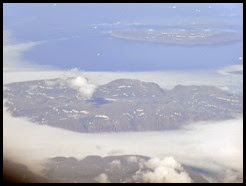 Flecks of icebergs in the lakes


In LAX one has to go through immigration, then retrieve luggage, go through customs and re-check the bags onwards to Portland. No real problem except there is a long and rather steep ramp joining the two areas which we really couldn’t manage. especially Nick. We were rescued by a kind airport employee who whisked the two large suitcases up the ramp while we followed with the carry-ons and those blasted backpacks. Then we needed to get to Terminal 6 and were directed outside and to the right. It turned out terminal 6 was about a kilometre away. There may well have been shuttles but they weren’t signposted and we ended up walking it, me swearing because of the plantar fasciitis hurting so much. We sat at the first opportunity and had a cold beer, then off to the far end of the building (of course) to find our plane boarding. I sort of dozed into Portland, managing to grab a bit of a sight of some of the volcanic peaks as we came into PDX. More trundling of luggage until we got the car hire sorted, followed by taking a wrong turn on the way. But we arrived safe to Cam and Christine and some very welcome glasses of wine. 25 hours on the road. Airports are getting too big and we are getting too old for this caper.

In Portland we of course needed to fit in with work requirements but as Christine and Cam have different working times, and Ry has pre-school three times a week, each day was a bit different. So we got to go shopping, eat out, eat in with Kim and Kevin, take Ry to OMSI (Oregon Museum of Science and Industry) do a street fair, and take time out down the coast, plus just generally relax, which we were more than ready to do after the long trip. Cam had time off in the second week so that was excellent.

Things at home and nearby
Down to the coast. First at Cannon Beach where the fog and sometimes rain had moved in, despite the fact there was a heatwave in Portland. Weather hits the slight range behind the beach and it is all cloudy. Not at all unpleasant but a bit cold so we moved on a bit, Nick and I to Wheeler, while the others packed up.


Wheeler was pretty as we waited in a cafe near the river. Very peaceful with the clouds still around.

Then on to Rockaway Beach where we had an apartment right on the beach for two nights. Lots of shots of Ry (of course). His joy in simple things is just delightful and so apparent in his face.
Not to mention the other members of the family

In the end, a few things. We met up with a “virtual” friend, Rocky from Tripadvisor and had a lovely lunch. So nice to meet her again as we did last trip.We had a lunch at a traditional Delicatessen with Christine and I got a proper Reuben sandwich which was tasty and something new for me indeed. And we had a last day with Cam up at Pittock Mansion in a vain attempt to see the volcanic mountains around Portland. On a good day it is a “4 Mountain Day” but mostly we required the eye of faith to see anything. The roses, however, were very pretty, as befits a “Rose City”.


As we left the next day, at least Mt Hood had the good graces to to show itself over our plane as we walked out to tranship from, Portland to Vancouver and the flight home. 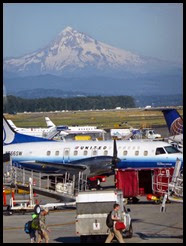 Posted by Lynn and Nick Booth at 00:20 No comments:

Well here we are again, trying to remember how Blogspot works a few weeks before we leave for the next big adventure.
We fly out via Hong Kong and on to Budapest, where we pick up an APT river cruise for 14 days to Amsterdam. A quick hop and skip around Belgium then into France where we take a hire car and drive anticlockwise around France, ending with 10 days in Paris before flying on to meet up again with Cam, Christine and little Ry in Portland. Then home via Air Canada from Vancouver.
In the time we are away Claire and Matthew are expecting their first child so it will be thrilling to come home to a new grandson.
This trip seemed so far away, now it is coming with express speed.
Posted by Lynn and Nick Booth at 19:49 No comments: